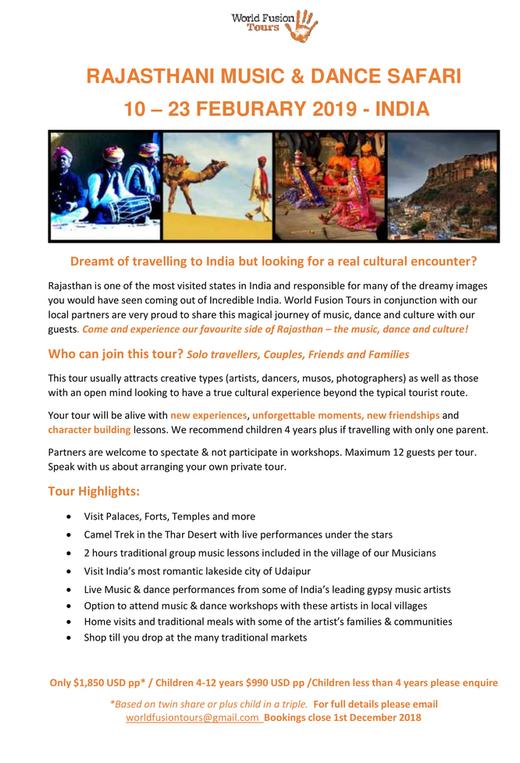 What makes india so incredible?
Incredible India… the national tourism board got that right! Which other country in the world has so many different languages, food, religions and traditions all under the one roof?!
India is so big that you would need to take a few years off work just to experience it all – and even then we think you still probably haven’t covered it!

Mother India as she is known has a soft spot in our hearts and for those of you travelling there the first time we know just how scary it can be!  So we package together some of our favourite locations and experiences so you can just enjoy the ride!

The smells, the food, the music, the traditions, the history, the architecture – it will blow your mind  - all you need to do is just learn to let go of the fear and you will see, experience and feel things you never thought travel could do!

World Fusion Tours is proud to present these options for your Indian tour - if you have something in mind let us know and we can create it for:

Join our group cultural tour to Rajasthan, India in Feb 2019- a music and dance experience with our traditional artists who are opening their hearts and homes to up to 12 lucky guests for this annual tour. Suitable for dancers, families and the creative at heart. Email us for full details: worldfusiontours@gmail.com

People of India:
The sheer number of languages and number of people in India, should tell you that there are a lot of regions to cover. We have broken these down for to help with your travel plans: